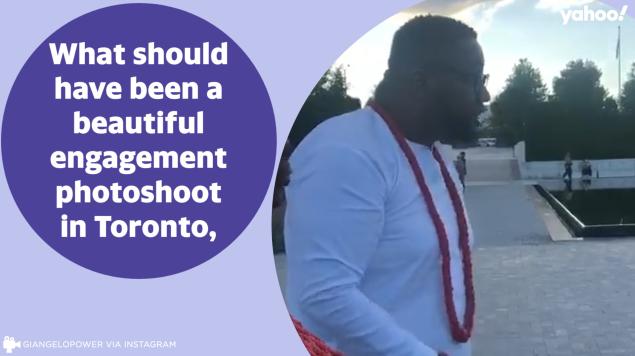 In what was expected to be a fun and enjoyable outing, Joel St. John and his fiancé Elizabeth Ononiwu’s engagement photoshoot ended with what they believe was racial profiling and the police being called. On Sunday, August 30th the couple went to the Aga Khan Museum, to use the building and garden as the backdrop of their photo engagement shoot, but after being told they cannot shoot without a permit, the security team at the museum called the police on the Black couple.

“Calling law enforcement on Black people in this climate over small things is the worst thing you can do. In this climate, it’s almost like you’re threatening their life over a photoshoot,” he said.

Prior to even going to the Aga Khan Museum, which is located in the North York area of Toronto, the couple from Durham researched if they would need a permit to shoot outside, but weren’t able to find any information online.

When they first arrived, they began taking photos near the museum, but security approached them to let them know this area was off limits unless they have a permit. They were told to go shoot at the park area nearby, and obliged.

“We went down there to shoot, the same guy was circling us after we just set up. Then he came and said we can’t shoot here, we can’t use professional equipment,” he said.

The couple was admittedly caught off guard by this, especially as there were other couples there using similar equipment, but had not been told to stop their photoshoots. They still removed their tripod and as they were about to shoot, they were told by using a DSLR camera, they were still in violation of the professional equipment rule. Additionally, the security guard told the couple that they were wearing costumes, which they found to be highly offensive.

“She said ‘It seems like it’s a professional shoot because you’re wearing costumes.’ This is traditional clothing,” he said.

After asking to seek some more clarity on what they felt was a different level of treatment, security advised them they would be calling the police to remove them from the premises.

When police arrived, the female security guard told officers that St. John had been aggressive and threatening in nature, which he refuted. He was carrying a cane for the photoshoot which he was tapping, and the security guard insisted that he was showcasing it as a weapon.

“I was very upset because I felt like the security guard was being offensive, and I knew in the back of my mind if I or other people lost it, it could be a life and death situation,” said St. John.

Police eventually escorted the couple and their photographer to their car in order to de-escalate the situation.

“I’m thankful that the Toronto Police Department came and they were calm. They were listening, nobody wanted to get agitated. I’m happy that was the energy, because it could have ended very differently,” he said.

Even though police were calm and listening in this instance, St. John admitted there was a lot of fear in the moment because of the racial bias that exists within law enforcement towards Black men.

“When you’re a Black man in a situation like that, you’re already behind the 8-Ball. You’re already halfway guilty, so there’s a lot of fear there,” said St. John.

St. John admitted he was rattled and reflecting on the incident with family, who were happy it didn’t turn into a violent situation.

“…My parents said they were just glad that [I was] home safe,” he said.

Following the shootings of Ahmaud Arbery who was hunted and killed by two white men in Georgia and the infamous killing of George Floyd at the hands of a Minneapolis police officer, St. John admitted that putting a black man into a situation with police is genuinely terrifying.

“There’s instances that we’ve seen in the U.S. and here, which happen when people will call law enforcement on Black men and hope that something would happen,” he said.

Public and Aga Khan Museum speak out on incident

After thinking about the incident, St. John took the incident public in hopes of letting people know about the injustices and profiling he and his loved ones endured and the scary situation he was put into.

“I think we need to press this because I don’t know what other people have come and suffered the same kind of thing and they haven’t said anything,” he said.

A spokesperson for the Aga Khan Museum told Yahoo News Canada that the museum has reached out to the couple in hopes of creating dialogue to ensure this situation doesn’t occur again.

“We truly apologize for the unfortunate experience that Joel and Elizabeth had when they visited us on Sunday evening for their engagement photoshoot. We are in a time that both intentions and appearances matter. This unfortunate incident makes us realize that we must do better to ensure people feel safe and welcome when they visit us,” wrote a spokesperson.

St. John said the conversation needs to be solution-oriented and cannot just be about this one incident especially after he started looking into the security team Logixx Security, St. John and came across similar reported incidents on their Google Reviews page.

“The company had just 2.5 stars, but there’s all the people that have actually suffered discrimination from that company, too,” he said.

In an email to Yahoo News Canada, the museum said they are conducting an investigation, but the company has suspended the security guard in question, and removed her from working at their location in the future. Even with the suspension, St. John feels there needs to be more done to avoid this situation from occurring in the future, and it needs to start with addressing anti-Blackness.

The Aga Khan Museum says it prides itself on being a connector of cultures and it is part of their core mission to bring people together.

“If they’re for peace, for unity and for inclusivity and diversity, then I think the handling of this will show what they’re really about. It’s not enough to be inclusive, you need to be anti-racist,” he said.