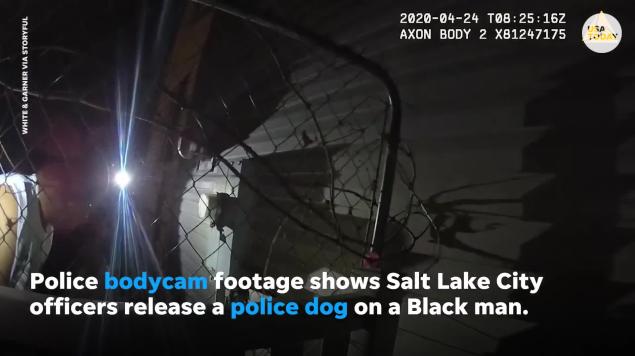 A white police officer in Utah was charged with second-degree felony assault after ordering a K9 dog to bite a Black man who had complied with his command to raise his hands, prosecutors announced Wednesday.

The Salt Lake City District attorney’s office charged Salt Lake City officer Nickolas Pearce with aggravated assault stemming from the April 23 incident in which he ordered his dog to bite Jeffery Ryans after responding to a domestic dispute call.

Prosecutors said Pearce kicked Ryans in his leg and forced him onto his knees. Pearce then ordered the dog to “hit” and the dog bites into Ryans’ left leg for about 20 seconds while another officer handcuffed him, the video shows.

“Good boy,” Pearce tells the dog as Ryan shouts, “I’m on the ground. Why are you biting me?”

“[Ryans] wasn’t resisting arrest,” Salt Lake County District Attorney Sim Gill told the Salt Lake City newspaper Wednesday. “He certainly wasn’t posing an imminent threat of violence or harm to anyone and he certainly wasn’t concealed. He was fenced in an area and was being compliant.”

The Salt Lake City Police Department said in a statement Wednesday that it is taking the district attorney’s decision and the Civilian Review Board’s findings “very seriously.”

“Both will be evaluated and taken into account as the Department is finalizing its Internal Affairs Investigation. If Internal Affairs finds that Officer Pearce committed a policy violation, the Chief’s Office will follow the disciplinary process required under state and federal law,” the statement says.

Ryans told The Tribune last month that he was confused by the officers’ orders as one told him to get on the ground while another ordered him to come to him.

“I wasn’t running,” he told the newspaper. “I wasn’t fighting. I was just cooperating. We’ve been through this. We’ve seen this. Always cooperate with the police, no matter what.”

Pearce told the Civilian Review Board he ordered the dog to bite because he felt that Ryans grasping onto the fence with one hand would allow him to get up and fight the officers, the board’s report says.

After the bodycam footage was published by The Tribune, Salt Lake City Mayor Erin Mendenhall announced the police department had suspended Pearce and the use of K9 dogs on suspects.

One of Ryans’ attorneys, Dan Garner, told USA TODAY last month that Ryans was “emotionally drained” from the incident. Garner said his client wanted reforms, including the ability to file excessive force complaints without interacting with police and an end to qualified immunity.

Ryans lost his job as a train engineer and had multiple surgeries after the attack, according to The Tribune.

Garner did not immediately respond to a USA TODAY phone message seeking comment on Wednesday.

Dr. Dre back in the studio just a day after release from hospital for brain aneurysm