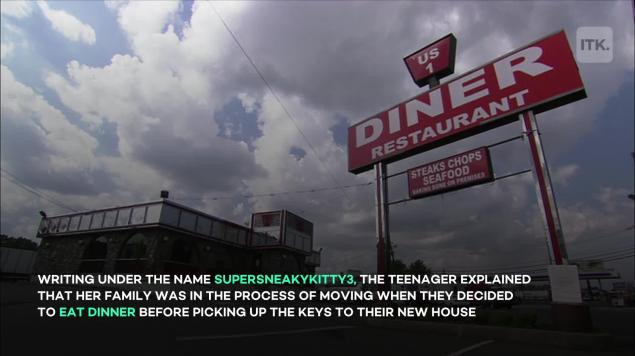 A teenager said she narrowly evaded being kidnapped at a pizza shop at the end of a road trip with her family.

The Reddit user, who was 14 in 2018 when the incident occurred, shared her story to Reddit’s LetsNotMeet forum, where users discuss “true stories of creepy encounters.”

Writing under the name supersneakykitty3, the teenager explained that her family had just driven across multiple states to North Carolina when they decided to eat dinner before picking up the keys to their new house.

They decided to eat in the car since they had the family dogs in tow. When she finished eating, she took one of the pups out for a bathroom break in the parking lot outside — and that’s when a stranger tapped on her shoulder.

“My dog notices him and immediately tries to jump on him, as she does with anyone, so I pull her back while I’m backing away from him,” she wrote.

She said the man, who looked to be in his 40s or 50s, smiled “creepily” at her before accusing her of taking his Border Collie. She was surprised when he said that, because her dog is clearly a Boxer.

“I look over to my parents car, that was just a couple feet ahead of me, unsure of what to do,” the Redditor said. “They hadn’t even noticed the man approach me, they were on their phones.”

She said the man then asked if she could help him look for the dog.

“I can feel my stomach drop in that moment,” she wrote.

The Redditor was terrified, but didn’t want to make a scene, although she’d read her fair share of kidnapping “horror stories” and knew exactly where this was headed. That’s when the man promised her money if she came to his truck with him.

“I tell him I’m busy and have to go, but best of luck to finding his dog, still trying to keep him on my good side,” she said. “Looking back on it now, I don’t know why I didn’t tell him my parents were right there.”

Things took a dramatic turn from there. He grabbed her dog’s leash and started to walk away, and when she took it back, he grabbed her wrist and ripped the leash out of her hand. He then started pulling her with him, she said, mumbling something to the effect of “just come see what I have for you.”

The Redditor said she started screaming for him to let go when her parents finally heard her — and saw her dog barking and chasing after her.

When the man caught sight of her parents running toward them, he let go and made a run for it. They didn’t chase after him.

The Redditor offered her advice for anyone who might find themselves in a similar situation.

“Don’t be afraid to use your words. Even if they offend the person,” she wrote. “Then is not the time to worry about what others think.”

Commenters were moved by her story.

“Most of these stories I can keep my calm, but like this one really freaked me out,” one user wrote.

“You handled it well. It’s a shame that he got away, but at least you’re safe from him,” another said.

“I learned long ago to stop being polite in these situations,” a third advised

1 thought on “Teenager issues harsh warning after harrowing near-abduction in parking lot: ‘I can feel my stomach drop’”