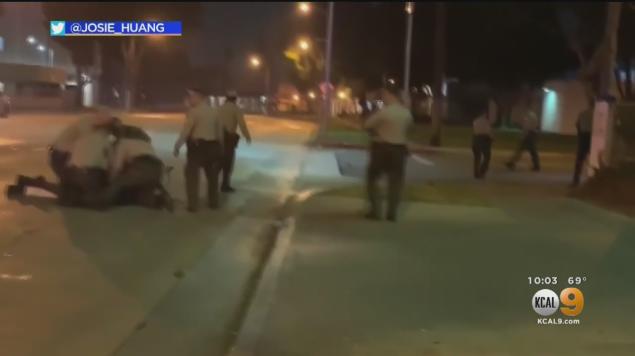 UPDATE: Capt. Kerry Carter of the Century Sheriff’s Station tweeted Sunday night that footage from the incident is being reviewed. “We are aware of the incident which occurred in front of a hospital which resulted in two arrests. There is footage of the incident and an active investigation is underway,” Carter tweeted without mentioning Huang by name. We are unable to comment further at this time.

The incident occurred outside the St. Francis Medical Center in Lynwood, California, where two deputies had been transported for gunshot wounds to the head while sitting in their patrol car. The suspect is still at large.

Huang had just covered a Sheriff’s Department press briefing when a small group of protesters gathered at the ambulance entrance of the hospital.

“To the protesters blocking the entrance & exit of the HOSPITAL EMERGENCY ROOM yelling ‘We hope they die’ referring to 2 LA Sheriff’s ambushed today in #Compton: DO NOT BLOCK EMERGENCY ENTRIES & EXITS TO THE HOSPITAL. People’s lives are at stake when ambulances can’t get through,” LA Country Sheriffs tweeted.

During the arrest of a male protester who “refused to comply & cooperate arrest…a struggle ensued at which time a female adult ran towards the deputies, ignored repeated commands to stay back as they struggled with the male and interfered with the arrest,” the Sheriff’s Department said.

Video of the skirmish seen in the tweet below shows five deputies throwing Huang to the ground and handcuffing her as she repeatedly screamed “KPCC.” Her press credentials dangled from her neck as they moved her to the patrol car.

Thank youfor what is the clearest footage of my arrest by @LASDHQ.

It’s how I remember it — like being tossed around in the ocean and then slammed into rock.

Huang’s cell phone was also recording at the time and confirms she verbally identified herself as a reporter from KPCC.

Somehow I was able to start a new video right away. You see my phone clatter to the ground and I start shouting “I’m a reporter…I’m with KPCC.” I scream for help from the TV reporters I know are around the corner doing their 11 p.m. live hits.

Deputy Juanita Navarro of the Sheriff’s Information Bureau confirmed that Huang was taken into custody on suspicion of obstruction of justice by “interfering with a lawful arrest.” Huang countered, saying she was just reporting on the arrest of a protester. Although Navarro said Huang didn’t have proper press credentials at the time of her arrest, they can clearly be seen hanging from her neck in the video.

“These are challenging and stressful times for everyone, but Josie Huang was arrested while doing her job. The charges should be dropped,” KPCC said in a statement. “Her arrest is the latest in a series of troubling interactions between our reporters and some local law enforcement officers. Journalists provide an essential service, providing fair, accurate and timely journalism and without them, our democracy is at risk.”

Huang — who sustained scrapes, bruises and a blackened eye during the scuffle — was released without bail from the women’s jail at the Century Regional Detention Center at about 4 a.m.

Los Angeles Supervisor Mark Ridley-Thomas has since asked the Inspector General to investigate the Sheriff’s arrest of Huang.

“We must continue [to] pray for the two ambushed sheriff deputies and their families. We must also require that the Inspector General launch an immediate investigation into the arrest of @josie_huang. The Citizens Oversight Commission must convene a special meeting on this matter,” Ridley-Thomas said in a Sunday tweet.

“While specific details remain under investigation, the Sheriff’s arrest of a journalist as she was attempting to do her job merits the attention of the entire Los Angeles journalism community,” the Society of Professional Journalists/Los Angeles said in a statement. “SPJ/LA takes special note that this is at least the second time that a journalist of color from this news organization was mistreated and injured while reporting on civil protests.

“This action by the Sheriff’s Department demands attention both for what appears to be an excessive use of force, and as a serious threat to the First Amendment, which protects the press, free speech, and the right to protest.”

In a joint statement, the Asian American Journalists Association Los Angeles chapter and board of directors wrote: “We stand in support of our fellow Asian American journalist. Video taken at the scene shows that Huang was forcefully detained by at least five officers. Her arrest serves as a reminder of the risks that journalists face every day while reporting on the front lines during these uncertain times. We hold the L.A. County Sheriff’s Department accountable to provide answers for the excessive use of force in the detainment of our colleague. The Los Angeles chapter of AAJA demands an investigation and apology for her arrest. We will not idly stand by as the mistreatment of journalists, especially journalists of color, continues by law enforcement.”

SAG-AFTRA President Gabrielle Carteris said, “These unconstitutional attacks on the rights of a free press are appalling and must stop now. SAG-AFTRA champions the U. S. Constitution and the work of our journalist members, whose primary role is to provide citizens with the information they need to effectively govern a democracy.”

“The people’s right to a free press is guaranteed by the First Amendment to the Constitution, which establishes that the press shall be free from government interference in the dissemination of information, ideas and opinions,” Carteris added.