Chadwick Boseman’s final tweet was a powerful one, supporting Sen. Kamala Harris and encouraging Americans to vote in the upcoming election.

Boseman died at the age of 43 following a years-long battle with colon cancer, his family shared on the actor’s social media accounts on Friday. The last tweet the Black Panther star had shared himself was a photo of him and Harris, the Democratic Vice Presidential nominee.

“YES @KamalaHarris!” he wrote on Aug. 11, the day Harris was chosen as Joe Biden‘s running mate.

Boseman shared a picture of him and Harris, both of whom graduated from Howard University, embracing and laughing. He added the hashtags #WhenWeAllVote and #Vote2020.

Harris, the first Black woman and first person of Asian descent to be named to either major political party’s presidential ticket, shared a similar photo to her social media on Friday, paying tribute to Boseman following the news of his death.

“Heartbroken. My friend and fellow Bison Chadwick Boseman was brilliant, kind, learned, and humble,” Harris wrote, noting that both she and Boseman are graduates of Howard University. “He left too early but his life made a difference. Sending my sincere condolences to his family.” 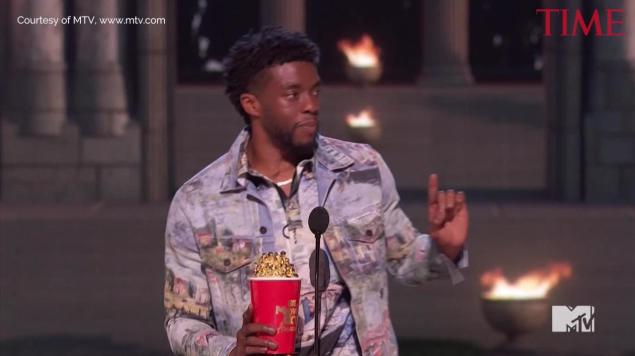 On Saturday, Harris shared another photo from the same event, writing: “From his groundbreaking work in Black Panther to his portrayal of Thurgood Marshall, Chadwick Boseman helped paint a new picture of what’s possible. Keeping his family, friends, and fans in my prayers during this difficult time.”

Former Vice President and current presidential candidate Biden also paid tribute to Boseman, writing, “The true power of @ChadwickBoseman was bigger than anything we saw on screen. From the Black Panther to Jackie Robinson, he inspired generations and showed them they can be anything they want — even super heroes. Jill and I are praying for his loved ones at this difficult time.”

In addition to his starring role in the blockbuster Marvel movies, Boseman is also known for portraying several historical figures, including Jackie Robinson in 42, Thurgood Marshall in Marshall and James Brown in Get On Up.

“It is with immeasurable grief that we confirm the passing of Chadwick Boseman.⁣ ⁣ Chadwick was diagnosed with stage III colon cancer in 2016, and battled with it these last 4 years as it progressed to stage IV,” Boseman’s family wrote in their statement on social media.

“A true fighter, Chadwick persevered through it all, and brought you many of the films you have come to love so much. From Marshall to Da 5 Bloods, August Wilson’s Ma Rainey’s Black Bottom and several more, all were filmed during and between countless surgeries and chemotherapy,” the statement read. “It was the honor of his career to bring King T’Challa to life in Black Panther.”