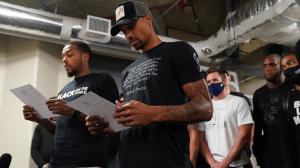 The Milwaukee Bucks were at the forefront of NBA players deciding not to take the court after the police shooting of Jacob Blake in Kenosha, Wisconsin. In the aftermath, White House senior adviser Jared Kushner dismissed the act and called it a night off without consequences.

Bucks assistant coach Vin Baker said on Tuesday those remarks showed a “level of ignorance” on Kushner’s part as part of an interview alongside senior vice president Alex Lasry and the Politico Playbook.

Baker was asked by Politico to comment on Kushner’s comments from CNBC last Thursday.

“There’s no sensitivity there,” Baker told Politico Playbook authors Anna Palmer and Jake Sherman. “I don’t obviously agree with the comment. There’s a level of ignorance there.

“This wasn’t about us affording to be able to take the night off. Again, this was about us seeing an egregious act, yet another egregious act, in our country and in our own backyard and it hit us in a place where it should hit everyone. Not just the Milwaukee Bucks, not just our players and our staff and our organization, but everyone should have been angry about what we saw. It was a basketball game. We decided to not play a basketball game.”

Baker noted that neither money nor “what was at stake” — a first-round playoff series game — impacted their difficult decision to take a stand.

Kushner, who is President Donald Trump’s son-in-law, called out players choosing to boycott.

“Look, I think that the NBA players are very fortunate that they have the financial position where they’re able to take a night off from work without having to have the consequences to themselves financially,” Kushner said. “So they have that luxury, which is great.”

“Look, I think with the NBA, there’s a lot of activism, and I think that they’ve put a lot of slogans out. But I think what we need to do is turn that from slogans and signals to actual action that’s going to solve the problem.”

In remarks to Politico, Lasry said the comments were “a little ironic, coming from him” and underscored the fact that it wasn’t “anyone taking a night off and then just going back to their hotel room like, ‘eh … I just didn’t want to play today.’”

Kushner said on CNBC he would reach out to Los Angeles Lakers star LeBron James. Lasry said he has not heard from the White House and there doesn’t seem to be any collaboration to “actual action.”

Rather than reach out to the Bucks or discuss the issue, Trump instead took to Twitter on Tuesday morning to again push the narrative that lower NBA ratings mean people are less interested in the league.

Lasry also noted that the Wisconsin Legislature “hasn’t done anything for four months.” The state legislature did not even debate the issue when it gaveled in on Monday and it has not passed a bill in more than 139 days.

It was what the team was trying to draw attention to and he said the boycott got people’s attention since the president was tweeting about it.

“This was a statement,” Lasry told Politico. “And this was an act to say, ‘Hey, enough is enough, and if you guys aren’t going to take this seriously, then we’re going to have to do something to bring this to the forefront again and hopefully force people to act.’”

The Athletes for Impact group also signed a letter Monday urging the state to “ensure justice is served for the officers that shot Jacob Blake” and for police reform legislation.